In late May, Grace Hinchman was thinking about her upcoming summer break, while also contemplating the eventual start of her junior year at Loyola University in the fall. The 20-year-old Genevan wanted to create a new chapter in her collegiate volleyball career and advance her marketing and finance studies at the Chicago campus.

Never did it cross her mind that by the start of July, a doctor from Northwestern Medicine in Chicago would say Hinchman’s experiences through June resulted in an important “one in a million” story for the medical community.

That story had a tough opening chapter in which Hinchman woke up one morning with a bad headache that wouldn’t go away.

“I went to Central DuPage Hospital first because I had a headache and fever, but all of the checks for COVID and meningitis came back negative,” Hinchman said of her sudden illness in early June. 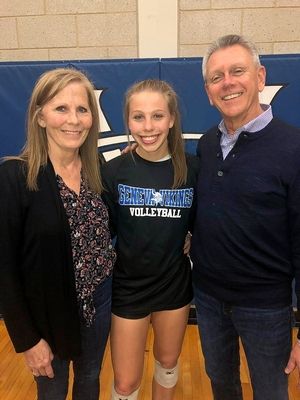 Grace Hinchman with parents Jane and Allen during her senior year at Geneva High School in 2020.
– Courtesy of Northwestern Medicine

After being sent home for a couple of days, Hinchman couldn’t shake the fever and went to see specialists at Edward Hospital in Naperville. At that point, things were about to go south frighteningly quick.

While in the waiting room at Edward Hospital, Hinchman suffered the first of what would be numerous seizures. After more seizures that night and the next day, Hinchman was on her way by ambulance to Northwestern Medicine in Chicago.

“I remember part of the ambulance ride to Northwestern, but in that time frame I don’t remember anything,” said Hinchman, a 2020 graduate of Geneva High School. At Northwestern, she endured four lumbar punctures, a bone marrow biopsy, an MRI and CT scans. She recalls none of it.

That extensive testing and trying different medications resulted in the diagnosis of a rare condition known as FIRES, or febrile infection-related epilepsy syndrome. Doctors generally don’t beat around the bush about the dangers and rarity of FIRES, saying about one in a million kids are affected. They also call it a “catastrophic epilepsy condition.”

A diagnosis like that delivers plenty of fear to parents. Grace’s parents, Jane and Allen Hinchman, know that all too well.

“She had 35 to 40 seizures over 10 days; it was a lot,” Jane Hinchman said. “You don’t know what each day is going to bring, as they were increasing seizure meds and hoping that would work. It was frightening.”

It was a rough month in the hospital for Grace, but doctors were sure they had to treat FIRES, which itself was a frightening diagnosis for the family. The chances of a full recovery from this form of epilepsy are in the 18% to 20% range. 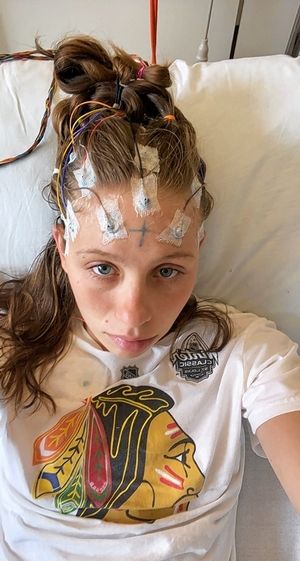 Doctors finally landed a knockout punch in giving Hinchman a medication called anakinra, which had shown promise in some small-case series. For Hinchman, it was the start of ongoing daily improvement.

To say the Hinchman family was relieved Grace ultimately fell into that small full-recovery range and was released from Northwestern the first week in July, would be an understatement.

“Lots of people were praying for her and being very supportive,” Jane Hinchman said. “Doctors knew the direction they had to go but weren’t promising anything.”

Stephen VanHaerents, an epilepsy specialist at Northwestern Medicine, was just as surprised and pleased as anyone.

“These novel treatment options were not available 10 to 15 years ago,” VanHaerents said in a media statement from Northwestern. “Grace has responded beautifully to these medications and her story is important for the epilepsy community because it shows you can get control of your seizures and get your life back.”

For Hinchman, that meant playing with the Loyola volleyball team again and going to classes. She continues to take her medicine and follows the keto diet, which research indicates helps improve the quality of life for those suffering from epilepsy.

Ayush Batra, a neuro critical care specialist caring for Hinchman, put even more emphasis on the rarity of the positive outcome.

“I have taken care of patients who had previously been diagnosed with FIRES, but this was truly the first time where we made the diagnosis and had to make decisions to implement therapy,” Batra said. “These are one in a million type cases that present every now and then, and many residents and fellows will just see one or two throughout their training.”

Hinchman was happy to reconnect with her parents, three brothers and two sisters, both of whom are nurses. 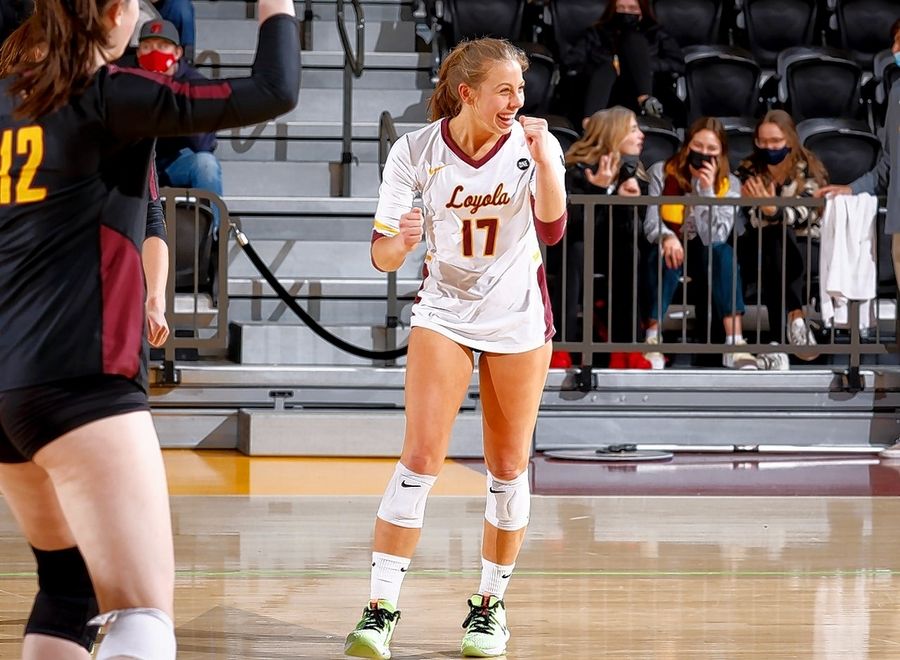 Grace Hinchman in a volleyball match with her Loyola University Chicago team, which competes in the Atlantic 10 conference.
– Courtesy of Northwestern Medicine

Her experience with a rare illness hasn’t quite swayed her into considering switching her major to possibly pursue a career in medicine. But she certainly has a new outlook on that occupation.

“I’ve been talking to my sisters and saying that being a doctor or nurse would be so cool,” she noted. “Just helping people would be great.

“I am so grateful to all of the nurses and doctors, my family and all of the people in Geneva reaching out and praying for me,” Hinchman added. “When you realize how many people care about you, that was cool to hear.”

A social media review for the Gammon Coach House in Batavia proclaims the “staff was absolutely fabulous … warm, friendly and down-to-earth.”

On a recent Saturday night visit to this restaurant at 3 S. Batavia Ave., the same thoughts crossed my mind. It was really busy that night and we did have to wait our turn. But that’s understandable, considering how often we hear about how hard it is for restaurants these days to provide good service during busy times because of lack of help.

It wasn’t an easy night for the wait staff, but they worked really hard. I’m sure other restaurants sing the praises of their staff, especially during these past few years with all sorts of twists and turns with COVID and worker shortages.

Generally, if you are going to visit Gammon Coach House, you may have been lured by the promise of a great burger and beer selection. I didn’t feel like a burger that night, so I can proclaim that the grilled chicken sandwich with fried Tater Tots was quite good.

Mostly, I came out agreeing the review touting the staff as top-rate was quite accurate.

It will be interesting to see what Marshall McCarty, owner of the Walrus Room in Geneva, has in mind for a new establishment he’s setting up in the Dodson Place retail square along Third Street.

Work is being done through Wetmore Construction and Lifestyle Design by Bobbi Alderfer.

They’ll be reinventing the prime corner spot at 477 S. Third Street formerly occupied by Galena Cellars. The outdoor seating area has been taken out, so it will be interesting to see how designers reinvent that area when it’s time to get outside again.

Down that memory lane

The COVID pandemic knocked out plenty of graduations, weddings and reunions the past two-plus years. My Class of 1971 Naperville Central High School reunion was one of them.

We finally had it last weekend, a year late. Better late than never on this sort of thing, especially when glancing through the bound volumes of deceased classmates that confirmed time stops for no one and we have to have these events while we still can.

The reunion was a great time to talk to old friends, former Jewel colleagues (yes, I worked at Jewel grocery stores through part of high school and two years at College of DuPage) or just folks who were in your homeroom or gym class.

A tour of the high school was like our own “Back to the Future” episode, as this massive building looked and felt nothing like the one I thrashed around in all of those years ago.

The 50-year reunion was a bit different from past ones. If you have one coming up yet this year or within the next few years, here’s a few things you may notice.

When talking to so many people, you might be standing for a long time. Your knees and feet may remind you that you can’t stand around like you used to.

You’ll remember numerous interesting topics and past memories you shared with your classmates. But the next day you may not remember who told you what. That’s just how it is now.

You’ll find that the “popular” kids who kind of formed their own cliques back then and maybe kept you at arm’s length are, in most cases, really nice people. Similarly, you may find that some of the kids who were considered outcasts or never got involved in much, also have turned out just fine and were fun to talk to.

You may find some of your school’s most outstanding athletes are now part of that album of those who have passed. Who would have guessed?

The teachers we loved still had that special place in our memory banks, but the ones we didn’t care for remained the brunt of our jokes.

Some kids never change, I guess.

As subway horrors continue, Adams must push Hochul to act on crime

From inside the US’s most secure prison, ‘El Chapo’ is pointing fingers at what he says are the real powers in the drug trade

Service dog finds Russian UAV shot down by National Guard, once repaired to be used by Ukraine

As subway horrors continue, Adams must push Hochul to act on crime

From inside the US’s most secure prison, ‘El Chapo’ is pointing fingers at what he says are the real powers in the drug trade

Service dog finds Russian UAV shot down by National Guard, once repaired to be used by Ukraine

Chaim Bloom on the future of the Red Sox